There’s no shortage of expat news from the British Isles this week. A home office survey has been released showing expat Brits’ favourite destinations, and once again, Australia has taken the top position. Retirees already in Australia will be hoping that the latest call to unfreeze UK pension values will be heard by the government.

Elsewhere the government of Saudi Arabia is anticipating some serious revenue from fining organizations employing too many expat workers. Officials in Denmark appear to have a rather different dilemma – how to persuade skilled expat workers to stay in the country.

Also this week: good news for those wishing to buy a property in Jakarta, and bad news for anyone with a UK savings account.

The British government is facing pressure to amend its policy of freezing the value of state pensions for expats living in certain countries.

Expats living in Europe or the USA enjoy the same annual pension increases as those still living in Britain. However, expats in other countries, including Australia and Canada, have their pensions frozen at the value in place on the day they left the UK.

Clearly, many expats feel it unfair that their chosen destination determines the level of their pension, when they have paid into the UK system for decades. Meanwhile, the Australian government complains that its own benefits system is having to plug the gaps in expat income.

Expats in Indonesia will soon be able to buy property of their own thanks to a relaxation of local law.

Until now, in common with Thailand, foreigners have been unable to buy property in their own name. A new initiative, beginning in Jakarta, Batam and Bali will allow expats a home of their own as an alternative to renting.

Financing a purchase, however, may not be straightforward. The Telegraph quotes an expat as saying that local mortgages are extremely difficult to arrange for foreigners.

Rising inflation and stubbornly low interest rates are together making it very difficult for UK expats to gain any meaningful return on their savings.

At the time of writing, no UK-based saving account offers an intere... (keep reading)

The Maid? I Think She’s Taking a Nap

When you’re living in the Philippines, it’s a good idea to hire a maid. They’re not expensive and they make a world of difference for you (and your wife). In actuality, what they call a “maid” over here indicates a person who is far more than someone who will just “tidy up the house”. The politically correct term for these ladies is “helper” but, in actuality, a more accurate term is “servant”. My wife had worked as one, for a well-off family in Hong Kong for over 15 years, when I first met her online. So I thought that it was time that she had the benefit of having her own maid. In case you’re wondering what the maid is expected to do, here is an incomplete list of the things that our current maid does: hand wash the clothes, clean the house, scrub the floors, cook lunch, feed the dogs (six of them), goes to the market with my wife, sweeps the yard, takes care of the plants, helps us prepare for parties, and on and on… We live out in the rural area, where things are cheaper and people are poorer – so we pay her 4,000 pesos a month (about $97.50). She works eight hours a day, six days a week and goes home, down the road, every day. Plus we give her bonuses and help with her family’s expenses from time to time.

Now before you think of me as Mr. Scrooge, allow me to tell you that this is top dollar over here and her friends are quite envious. This is especially true since we’re extremely nice employers, never “bossy” and at lunchtime, she cooks lunch and eats with the wife while watching TV and she works at her own pace and is never rushed. This is unheard of in these parts. Plus, her job with us makes it possible (along with her husband’s rice farmer pay) to send their daughter to the local college (!)

Anyway, of course, I’m referring to my current maid. The first one we got wasn’t quite as good. To say the least. Her name was Rita and she’s related to one of my in-laws (my bother-in-law’s wife’s brother – by way of marriage to his son). Oh, did I mention that she wasn’t quite as good? Well, this young lady did about 1/5th the amount of work that our current maid does and spent the majority of the time either texting on her cell phone or sleeping (!) This is what happens when you forget to see the obvious. Good maids are at a premium, here. The one I have now would easily be working for some other foreigner if our pay and treatment of her had not made her very loyal to us. Her family is close to us and her daughter calls me “Uncle Henry”.

How Much Does That Money Cost?

When I first arrived in the Philippines, one of the mistakes that I made was not understanding the value of money. It’s a pretty subtle point – one that nearly all newbies to third world countries will make, at one time or another. Here’s the deal. Money amounts for purchases, handouts, you name it are relatively specific to the region you happen to be in. A good analogy would be my childhood. I was a kid back in the 60s. That meant I could buy a small bag of potato chips, during 3rd grade lunchtime for five cents. I could get a coke for ten cents. So if a relative gave me a dollar, it was a lot of money. Of course, things are vastly different these days. The weird part is that if somehow I was able to get into a time machine and head on back to the early 60s, I would instantly know the difference between the value of money there and the value of money back in my own era. Somehow, this simple concept escaped me when I arrived in the Philippines.

This meant that I was spending waaaay too much on things and, of course, you know that the only person who would ever point that out was my wife – if she happened to be with me. For example, if I took a tricycle ride to the store and back, inevitably I was going to end up paying about twice as much as I should have. The same holds true for just about everything that I bought. This began the moment I got off the plane and paid $1.00 for a bottle of cold purified water. In reality, I should have paid a fraction of that amount.

I was doing weird things like handing out 50 pesos (about $1.20) to kids asking me for money. Not so much, you say? Well, consider this. You can buy a kilo (2.2 lbs.) of rice for about 30 pesos. Here, we have a kid asking for basically 2 or 3 pesos for some candy (we’re not talking starving children here – trust me) and I’m handing him 16 – 25 times what he was expecting! Seriously, why didn’t I just paint a target on my back? Can you imagine what the locals observing this event thought? Obviously, I had access to more money than I could ever possibly need. And, of course, I made it a point to stupidly do this in the marketplace (!) Do you think I got any “bargains” that day?

So, here’s my point. Before you start buying things and handing out stuff to the locals – make sure you know exactly what “decade” you happen to be living in. Hey, if a woman with a small child approaches me for a handout and I give her 50 pesos (or 100, if it happens to be a holiday), she is more than th

The expat news this week includes a couple of positive stories - a welcome change from the economic doom and gloom that has pervaded in recent weeks.

This week, one news story reports that more and more Brits are looking to move abroad. Those moving to China will be pleased to hear that the majority of expats there enjoy substantially more disposable income than they did in their former counties. Meanwhile, Brits headed to Germany will have less bureaucratic work to do, with the announcement of a reduction of mandatory paperwork for EU citizens.
Further East, however, expats in Saudi Arabia may notice a reduction in job opportunities, due to new employment legislation designed to reduce local unemployment. Negative expat news cannot be completely avoided!
EU Expats in Germany Face Less Bureaucracy
European nationals settling in Germany now have a reduced level of red tape to deal with, with the announcement that “Confirmation of Free Movement” documents are to be abolished.
Although EU nationals have freedom of movement around all EU nations, all countries have the right to impose individual registration procedures. New immigrants are obliged to follow these when they plan to settle permanently in a different EU country.
New EU expats in Germany are still required to register their home address with the German authorities.
original article
New British Expats on the Increase
A report from the British Home Office, based on figures from 2010, shows that an increasing number of UK citizens are leaving the nation to become expats.
Current figures suggest that around 1,500 people leave the UK every week to begin a new life abroad.
The latest statistics showed Australia as being the most popular destination, followed by North America and Spain.
Over 70% of those leaving the UK do so for work-related reasons.
original article
Expats in the UK Pessimistic about the Economy
While increasing numbers of UK citizens look to become expats in other countries, foreign expats living in the UK have a gloomy outlook on the future.
The 2012 Expat Explorer survey has found that 36% of expats living in Britain think that the outlook for the economy is negative. Although the UK technically moved out of recession recently, it is fair to wonder whether the positive figures are due to the effect of the Olympics, and if the UK is in fact heading for a “triple dip” recession.
Despite the negative outlook, the survey reports that only 7% of current UK expats... (keep reading)

Who shares the most (prices)?

Last week we shared the exciting news that the Expatistan Cost-of-Living Index had collected its 500,000th user-submitted price. And we shouted out the countries whose users have submitted the most total prices and the most prices per user.

But we wanted to share one more metric today: percentage of users from each country who share prices. We’ve ranked all the countries in the world by this number and shown the results below, both in a map and in a list. Check out the map and then scroll down to see the list of the top countries. 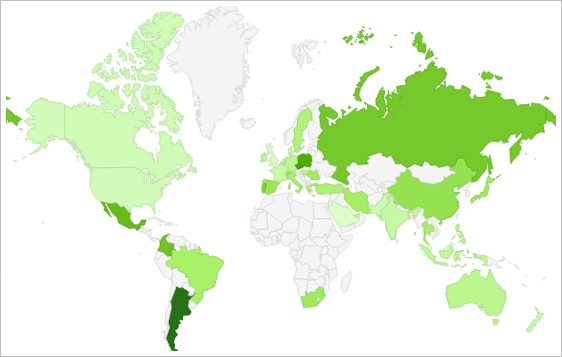 The list above shows that a jaw-dropping 5.22 percent of all Argentines (more than one out of twenty) who visit Expatistan enter prices into the Cost-of-Living index. That’s way ahead of any other country in the world, though users from any country on this list should be proud of their countrymen. (Even in Turkey, at 18 on the list, more than one out of every fifty visitors enters price.)

Is your country on the list? Great work! Why don’t you help keep it there by submitting prices on your home city?